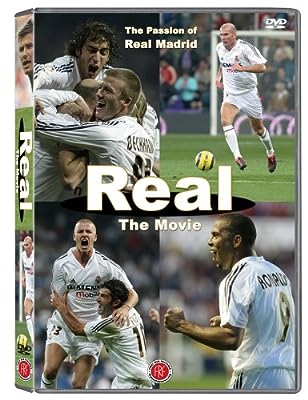 From the pitch to the locker room and to five continents, the passion for the greatest soccer team in the world is revealed in REAL: THE MOVIE. Five stories illustrating the worldwide passion for Real Madrid are interwoven with exciting action and behind the scenes footage. Part feature, part documentary, this thrilling film is a must for every fan and those who have yet to be inspired by the heroes of Real Madrid.

The film features some of the 2006 World Cup's biggest and most notorious stars, including David Beckham, whose sensational 59th-minute goal in England's second round match against Paraguay made him the first of his countrymen to score in three World Cups; Zinédine Zidane, sent off the field for head-butting Italy's Marco Materazzi in the chest after a heated (and highly debated) exchange of words in the Cup Final; Ronaldo, who broke the all-time World Cup Finals scoring record and became the second player ever to score three goals in each of three World Cups; and the disparaged Roberto Carlos, who announced his retirement from international football after Brazil's disappointing elimination in the quarter-finals.

For those who haven't noticed (a group that apparently includes millions of Americans), the sport that we call soccer and the rest of the world calls football is big. Very big. And no one is bigger than Real Madrid, the subject of Real - The Movie. This is the soccer equivalent of the New York Yankees, a rich, perennially successful club that features many of the biggest stars in the world; as of 2005, when the film was released, players included England's David Beckham and Michael Owen, Brazil's Ronaldo and Roberto Carlos, Portugal's Luis Figo, and France's Zinedine Zidane (who notoriously head-butted an Italian opponent in the 2006 World Cup final). All of them can be seen in the quasi-documentary sections of the film, as Real prepares for a climactic match against rival Barcelona. Scenes of the players practicing, the coaches strategizing, and the match itself are well done, with crisp cinematography, occasional use of animation and other effects, and an overall kinetic feeling well suited to the sport. But director Borja Manso also wants Real - The Movie to explain to the uninitiated just what it is that makes Real such a big deal all around the world. To that end, he incorporates several personal (and fictional) stories: A Tokyo schoolboy distressed over his girlfriend's shrieking obsession with Beckham. A young Madrid history teacher who doesn't understand Real mania, and his neighbor, an elderly woman who's been unable to return to the stadium since her husband passed away. A Senegalese kid dying to go to soccer school. A teenage girl in New York who suffers a severe leg injury during a match and finds inspiration in Ronaldo's rehabilitation after a similar incident. Pretty standard stuff, by and large, and way too on-the-nose to be very compelling. Combine all of that with some newsreel footage from Real's early days and lots of throbbing, thrilling music, and it all amounts to a big, glossy valentine packaged as wholesome family fare. Nothing wrong with that--unless you're a Boston Red Sox fan. --Sam Graham

Buy it Now
See more Real - The Movie on eBay