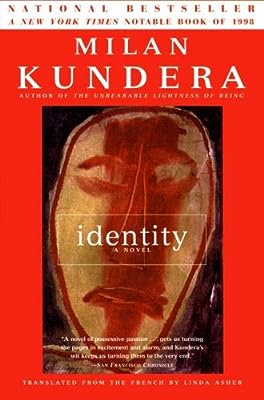 There are situations in which we fail for a moment to recognize the person we are with, in which the identity of the other is erased while we simultaneously doubt our own. This also happens with couples-indeed, above all with couples, because lovers fear more than anything else "losing sight" of the loved one.

With stunning artfulness in expanding and playing variations on the meaningful moment, Milan Kundera has made this situation-and the vague sense of panic it inspires-the very fabric of his new novel. Here brevity goes hand in hand with intensity, and a moment of bewilderment marks the start of a labyrinthine journey during which the reader repeatedly crosses the border between the real and the unreal, between what occurs in the world outside and what the mind creates in its solitude.

Of all contemporary writers, only Kundera can transform such a hidden and disconcerting perception into the material for a novel, one of his finest, most painful, and most enlightening. Which, surprisingly, turns out to be a love story.

The reader sits down to dinner with Chantal, who is waiting for her lover, Jean-Marc, in a seaside hotel. While waiting to be served, she overhears two waitresses discuss the unexplained disappearance of a family man. This blatant foreshadowing posits the central question of Identity: what we think we know about our intimates is predicated on projection, primal yearnings, and the deep denial of life's impermanence. Identity reads like a musical exercise; its playing out of themes is reminiscent of a fugue. An image dropped into the narrative will be revisited from a different vantage point, tossed back and forth between the lovers; out of it will be teased every possible meaning. The 51 sparse, tiny chapters reinforce the fuguelike feel.

Key bits from the characters' pasts become signature refrains. Chantal, for example, has buried a son, who died at the age of 5. Strands such as this are dropped lightly in the narrative, to be pulled through later chapters like a needle with different colored threads. Later, for example, the boy's death will trigger her unpleasant realization--that it was, in the end, a "dreadful gift." Children, she thinks, keep us hopeful in the world, because "it's impossible to have a child and despise the world as it is; that's the world we've put the child into." Thus, her child's death has set her free to live out her genuine disdain of the world. Although the illogical extremes of Kundera's thought can be wildly dissonant and wondrously shocking, this reiterative device of Identity lacks energy. There's no sense of discovery about these characters. They remain flat; the style effects one like an Ingmar Bergman film when one is in the mood for Sam Peckinpah.

As if in serendipitous response to her pain in getting older, Chantal receives an anonymous "love" note. More notes follow. Will they prove Jean-Marc's attempt to sweeten her sad disclosure? Her sexual awakening begins to blur the boundaries of what's real. All well and good, but somewhere along the line, Kundera concludes that Chantal is weak because she's older. Age, we are asked to believe, becomes a wedge between the lovers, even though Chantal is only a few years older than Jean-Marc, who is himself only 42. And in the exploration of her sexuality on the wax and wane, Kundera succumbs to cliché: she is consumed too often by too many flames, and red is all used up as a symbol of violent passion. On the subject of male and female desire, Kundera is incomparably funny, and the novel sports some nervy images--masturbating fetuses; our human community joined in a sea of saliva; the ubiquity of spying eyes, harvesting information for profit; the human gaze itself, a marvel, jaggedly interrupted by the mechanical action of the blink. Kundera betrays a witty revulsion for the values and mores of the late 20th century.

But with sentences such as, "This is the real and the only reason for friendship: to provide a mirror so the other person can contemplate his image from the past, which, without the eternal blah-blah of memories between pals, would long ago have disappeared," the reading experience reduces to an annoyance. Perhaps this is the fault of the translator attempting a breezy, colloquial tone. But it's sloppy and careless. Still the novel's an entertainment, a good companion. Reading it is like passing an afternoon in a sidewalk café, catching up with an old friend, say, with whom one has shared youthful cynicism and diatribes against the ignominies of human behavior. One will look back on such an afternoon and remember too many Galloises smoked, too many cups of coffee, moments of intense engagement that fell, alas, into the indulgence of a "retro" ennui.

Buy it Now
See more Identity: A Novel on eBay