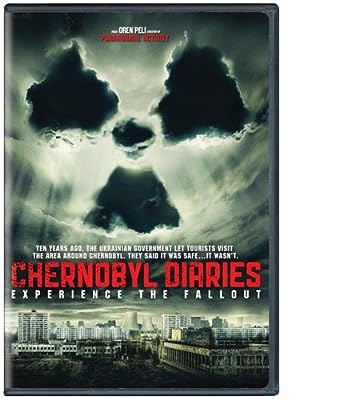 Oren Peli, the creator of Paranormal Activity, Insidious and television’s The River, brings forth a new and entirely compelling vision of terror. Based upon an original story by Peli, CHERNOBYL DIARIES is set in the Russian city of Prypiat that once housed the workers of the Chernobyl nuclear reactor. In this xenophobic horror-thriller, a group of friends, vacationing in Europe, find themselves stranded in the eerie, abandoned city... only to discover that they are not alone. In the aftermath of nuclear disaster years before, nature has begun to reclaim everything. And as the sun sets on this desolate ghost town, inhuman cries cut through the night air. Nature may have taken hold of the radioactive ghost town, but the supernatural stalks the streets in search of new blood.

A big part of the marketing pitch for Chernobyl Diaries is that it sprang from the mind of Oren Peli (cowriter and producer), the creative force responsible for birthing a new genre of "reality" horror with Paranormal Activity. Chernobyl Diaries doesn't follow the same Paranormal rules of pretending as though what we're seeing is genuine found footage of something horrific, or documentary evidence of actual supernatural events. But it does stick to the general rules of the slick new breed of horror movies that force a more immediate sense of dread by placing us within the action in periods of real time. Added to that is the stylistic use of jangly hand-held camera, natural light, and nerve-wracking glimpses of action that mimic the unsettling effect of peripheral vision. The setup is as old as Friday the 13th: a group of beautiful young bodies trapped in an island environment are gruesomely knocked off one at a time by a barely seen vengeful presence. A couple of movies have exploited the creepy potential of the deathly ghost town of Chernobyl and the adjacent city of Pripyat, where the doomed nuclear plant workers lived, but none with such an air of hair-raising authenticity (there's lots of seamless digital background fakery, and the actual stand-in filming location was Serbia). Four American friends and a pair of European travelers take a spur-of-the-moment "extreme tourism" visit to the wasteland city with a mysterious Russian guide based in Kiev, only to be turned away by Russian authorities when the vanload of them try to enter through the main gate. Undeterred, they find a back way in and at first have lots of creepy fun wandering the ominously desolate ruins, with nary a thought for the clacking of a Geiger counter or the strange signs that they may be under surveillance. The big trouble begins when they find the van sabotaged, stranding them overnight while feral dogs, psychotic bears, and possibly something more sinister circle around to mess with their minds and their bodies. It all ends very badly over the course of the next day and night. The presence of mutated creatures is hinted at, and they're briefly seen in the dank corners and dusty halls of abandoned apartment flats, institutional chambers, or industrial warehouses that have become home to ghastly inhabitants in the intervening years since the nuclear accident. While not a classic of the genre, Chernobyl Diaries makes excellent use of its premise and surroundings to keep the tension high. Horribly rendered things happen unexpectedly on the edges of the frame or just out of sight from a flashlight beam or around the corner of a decaying concrete slab. A whiff of conspiracy is suggested when the Russian authorities make brief appearances, but the more disturbing and effective scares grow from the threat of activity that's a result of the paranormal elements in a story and a place where no hapless, numskulled young thing should dare tread. --Ted Fry